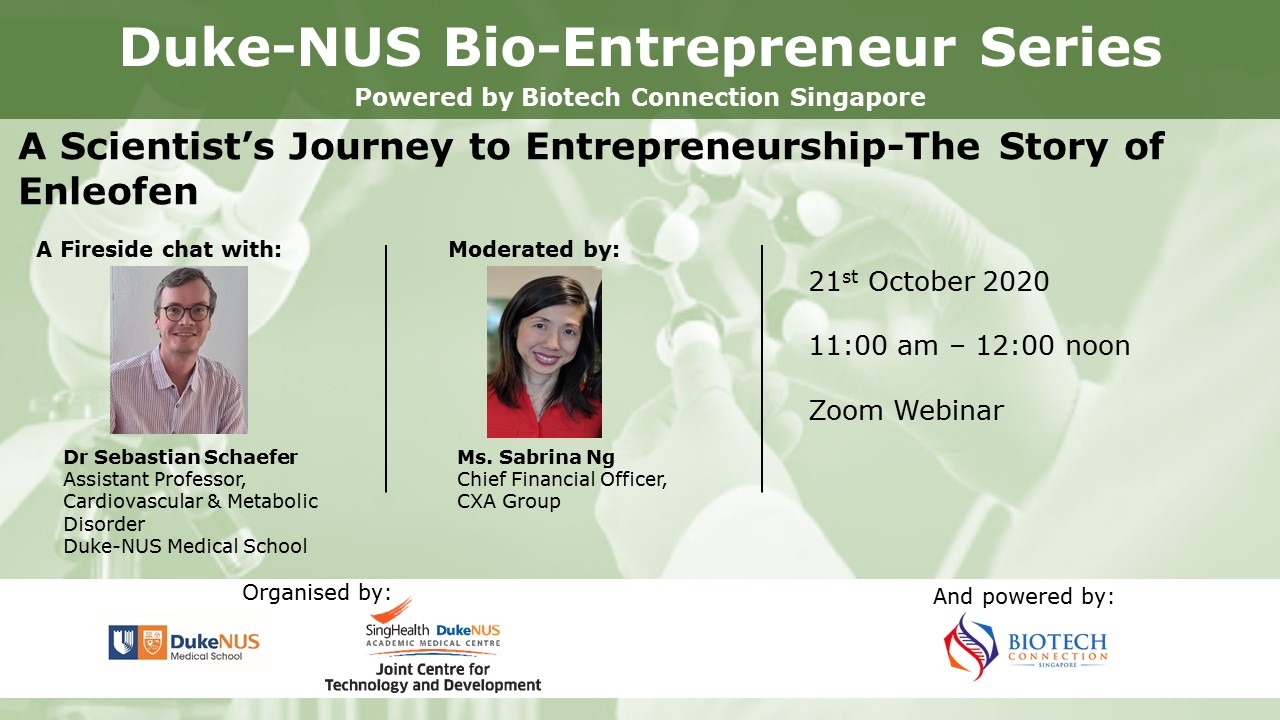 In the latter half of 2020, BCS partnered with Duke-NUS to host the Duke-NUS Bio-Entrepreneur Series. This series consisted of two talks that featured two different start-ups: the newly minced cancer immunotherapy startup PairX Bio and a Singapore-based biotech company, Enleofen.

The second webinar of the series titled “A Scientist’s Journey to Entrepreneurship – The story of Enleofen” was moderated by Ms. Sabrina Ng, Chief Finance Officer, CXA Group and featured Dr. Sebastian Schaefer, Assistant Professor, Cardiovascular and Metabolic Disorder, Duke-NUS Medical School. The webinar started with Dr. Schaefer discussing how he navigated the road of bio-entrepreneurship while balancing academic research and how as a postdoctoral fellow, he co-invented a technology that was spun out into a company called Enleofen, whose R&D program was later acquired by Boehringer Ingelheim (BI).

The journey leading up to this point was not so straight-forward for Dr. Schaefer though. In the pursuit of doing applied research, he transitioned from a chemical engineering background to a PhD in genetics, thanks to a short stint at MIT that helped him gain exposure to different aspects of academics such as applied research, as well as the development and commercialization of different technologies. Soon after, he started working on NGS (Next-generation Sequencing), an up-and-coming technology at that time and collaborated with Dr. Stuart Cook, a cardiologist who was previously working in London. This collaboration led to Sebastian moving to Singapore. Dr. Cook was interested in working on fibroblasts, which was a relatively understudied field then and Sebastian started analyzing sequencing data in the context of cancer patients. Through their research together, they realized that IL11 was the most upregulated gene in the fibroblasts of most fibrotic disease patients and together discovered one of the underlying mechanisms in the development of fibrotic diseases. Their anti-IL11-antibody platform formed the basis for launching Enleofen.

Their secret of success was good science coupled with working with a great team that brought together different aspects of entrepreneurship. According to Sebastian, a clear vision of what needs to be done is important as different ideas need to be executed in the most efficient but well documented way. The ability to leverage on external knowledge and input from others also goes a long way.

When asked how PhD programs can be redesigned to nurture an entrepreneurship mindset, Sebastian suggested that exposure to different environments is important in the early stages of one’s research career and researchers should be encouraged to visit different labs and learn about the commercial aspects of science. As for researchers, they should pursue new challenges and opportunities, and leverage their skills in different settings. It is also necessary to be aware and well-read about the biotech scene, to be a good communicator and to be unafraid of building new networks and connections.

Overall, both webinars saw active participation from over 150 attendees and the organizers would like to thank the speakers and all the participants for their engaging interest.

By Shainan Hora on behalf of BCS

Key takeaways from this webinar: 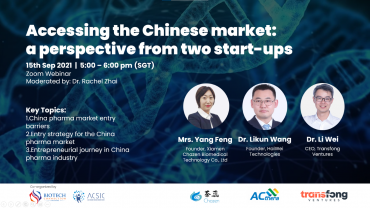 In this webinar on "Accessing The Chinese Market: A Perspective From Two Start-Ups", Dr. Likun Wang, Mrs. Yang Feng and Dr. Li Wei will share their knowledge on emerging areas in pharmaceutical developments, experiences entering the China pharma market and the network that supported them going through this entrepreneurial journey. 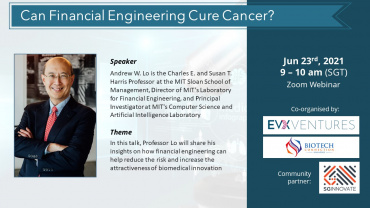 In this EVX-BCS webinar, Professor Andrew Lo from the MIT Sloan School of Management will explain how the tools of financial engineering—portfolio theory, securitization, credit default swaps, and other commonly used financial techniques—can be used to reduce the risk and increase the attractiveness of biomedical innovation so as bring new therapies to patients faster. 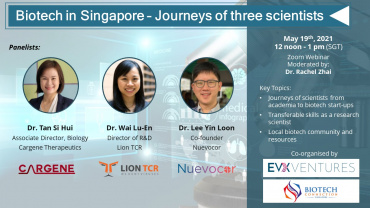 In this EVX-BCS webinar on the journeys of three scientists in biotech, Dr Tan Si Hui, Dr Wai Lu-En, and Dr. Lee Yin Loon will share with us their journeys from academia to biotech start-ups. This panel of scientists will introduce to us a path for those with a spirit of creativity, courage and capability to bring their scientific discoveries to the market.