Artificial intelligence based technologies are quickly gaining a lot of attention especially in the healthcare sector. As such, the AI in Healthcare event co-organized by Biotech Connection Singapore and SingHealthOffice of Intellectual Property (SHIP) at the SGH academia was filled with around 175 attendees to listen to an enlightening panel discussion on how AI-based technologies are improving healthcare. This event featured experts who included entrepreneurs, technologists, clinicians and IP experts. 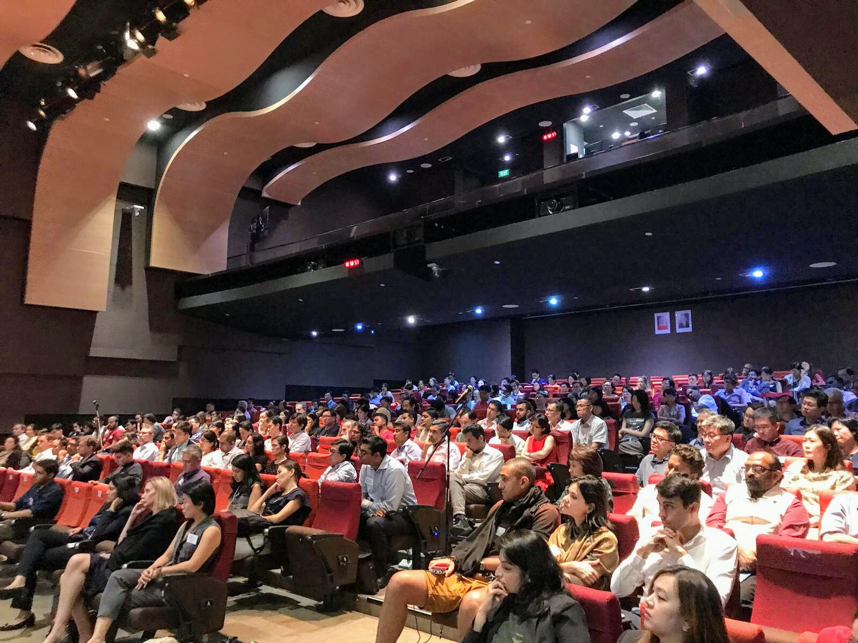 The panel discussion was moderated by Prof Philip Wong, a Senior Consultant Cardiologist at the National Heart Center Singapore and an interventional cardiologist by training. Various aspects ranging from how AI based technologies are being used by different companies to which clinical processes will AI have impact on was discussed. One of the main focuses of the evening was data protection especially the vast patient data.

Prof. Dean Ho, the Provost’s Chair Professor, Director of N.1, and Head of the Department of Biomedical Engineering at the National University of Singapore talked about his CURATE.AI platform. In their clinical studies they utilise patient’s own data to personalise their treatment for the entire duration of care.  He also mentioned that curate treated patients left hospitals in just 30 days after transplants.  In addition, they are also able to create lower dosing to treat cancer thereby cost cutting the treatment.

When Dr. Aneesh who is the CEO and Co-founder of Qritive was asked about the accuracy of AI in radiology, he explained how Qritive takes advantage of machine learning and intelligent image analysis to drive the accuracy in identifying complex patterns in tissue and blood samples for cancer diagnostic. He said accuracy is very important as every microscope takes slightly variant images. 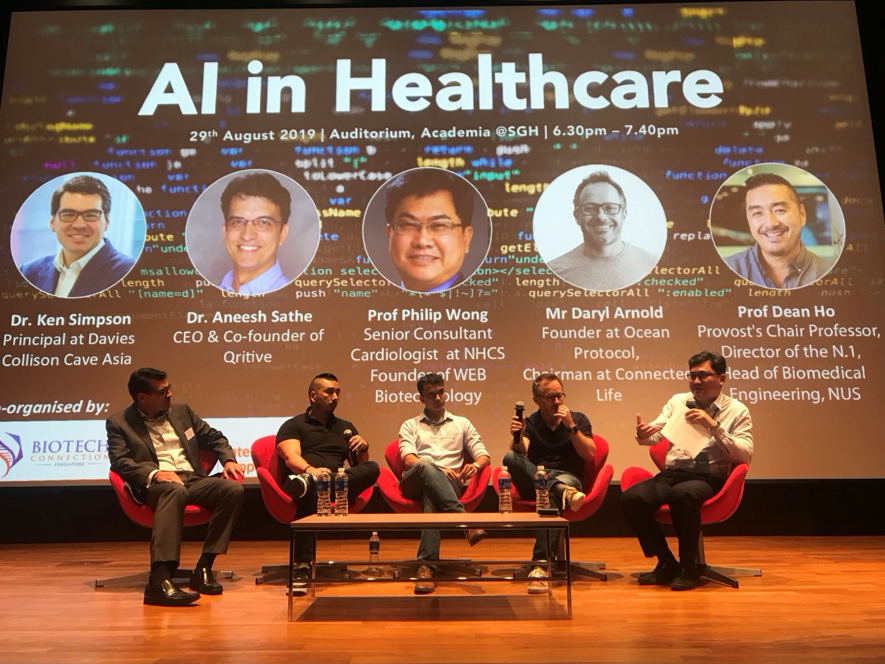 Mr. Daryl Arnold, Founder of Ocean Protocol, Chairman of ConnectedLife explained about how their protocol helps in unlocking data, particularly for AI.  Their company utilises blockchain technology to allow data to be shared and sold in a very safe, secure and transparent manner.

Dr. Ken Simpson, Principal at Davies Collison Cave Asia and a registered patent attorney in Singapore and Australia talked about the function of IP in AI. He explained about his work on helping clients to enforce IP rights and also advising them on IP strategy.

After the panel discussion, the floor was open to questions from the public. The questions asked were commercial, technical, clinical and IP related. 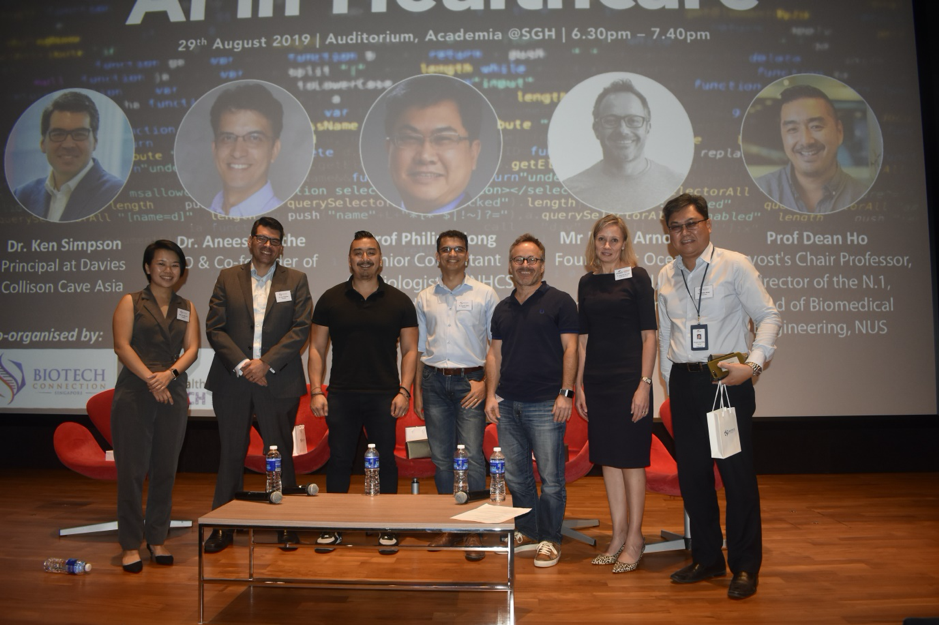 At the end, they all agreed that great technology, like AI should not be overused.

Ken assists innovative organisations to obtain patent protection and to develop IP strategy for information and communications technologies (ICT) across a range of industries including health care and finance. He is a registered patent attorney in Singapore and Australia and is a former Senior IP Counsel for Mastercard, where he managed the company’s Asia/Pacific IP function.

Ken completed a PhD in Physics, followed by postdoctoral research in Bioinformatics at the Walter and Eliza Hall Institute (WEHI). At WEHI he collaborated with medical researchers on various projects relating to cancer and infectious diseases. His research included development of new statistical and computational methods for analysis of gene expression data.

Provost’s Chair Professor at NUS, Director of the N.1 Institute for Health

Using his CURATE.AI platform, Prof. Ho has led multiple pioneering clinical studies that have validated the promise of N-of-1 medicine, where only a patient’s own data is used to personalise their treatment for the entire duration of care. Multiple CURATE.AI-based clinical studies are ongoing or cleared for start in the areas of solid cancer and blood cancer therapy, digital therapeutics/personalised learning, and post-organ transplant immunosuppression, among others.

Prof. Ho is an elected member of the US National Academy of Inventors (NAI). Election to the NAI is the highest professional honor for academic inventors. He is also a Fellow of the American Institute of Medical and Biological Engineering (AIMBE) and Society for Laboratory Automation and Screening, as well as a Fulbright Scholar. He is also a recipient of the NSF CAREER Award, Wallace H. Coulter Foundation Translational Research Award, and V Foundation for Cancer Research Scholar Award, among others. Prof. Ho was recently named to the Asia Tatler Gen.T List, which honours young leaders who are shaping the future of the region. Prof. Ho has appeared on the National Geographic Channel Program “Known Universe” to discuss his discoveries in drug delivery and imaging. His discoveries have been featured on CNN, The Economist, Forbes, Washington Post, NPR and other international news outlets. He has served as the President of the Board of Directors of the Society for Laboratory Automation and Screening (SLAS), a 26,000+ member global drug development organization comprised of senior executives from the pharmaceutical and medical device sectors, as well as academic thought leaders.

CEO and Co-founder of Qritive

Aneesh is the CEO and Co-founder of Qritive, and has completed his PhD from the Mechanobiology Institute. With over a decade of experience in building advanced tools for cell and cancer biology, Aneesh now wants to revolutionize digital pathology with explainable AI.

Qritive was founded by Aneesh and his co-founder Kaveh with the aim to make cancer diagnosis, fast, accurate and affordable. With collaborations with Singapore’s largest hospitals, NUH and SGH, Qritive is building AI solutions that offer help to the important decision makers in cancer diagnosis, the pathologists. Qritive’s unique team consists of experts in cancer biology and machine learning, which enables them to translate clinical problems into computer science problems. The Qritive team believes that AI in healthcare can be made useful only by combining the knowledge of biology and machine learning in a user-friendly way.

Philip Wong is Senior Consultant Cardiologist at the National Heart Center Singapore and an interventional cardiologist by training. He continues active clinical practice and has seen greater than 20,000 outpatients visits in his career as a physician. Dr Wong is a keen clinician innovator and has interest in Medical Devices, Digital and Health Technologies. He is Deputy Director, National Heart Research Institute Singapore and adjunct Professor, NTU, where he teaches development of medical devices. He has published greater than 70 peer reviewed publications and is Associate professor, Duke-NUS Graduate Medical School. He continuous to enjoy sharing clinical experience, innovation and research ideas with medical students. Dr Wong founded WEB Biotechnology Pte Ltd in 2009, and is the Inventor of the Spyder ECG, a cloud-based continuous ECG monitoring device. This device has received Medical CE and HSA certification and is currently available in many countries globally. Dr Wong believes that Digital Health and its various iterations with the use of Artificial Intelligence, will be the technology cornerstone on how we practice affordable and efficient health care in the future. He actively promotes digital health, its interactions and innovations in the healthcare domain, with fellow innovators and industry.